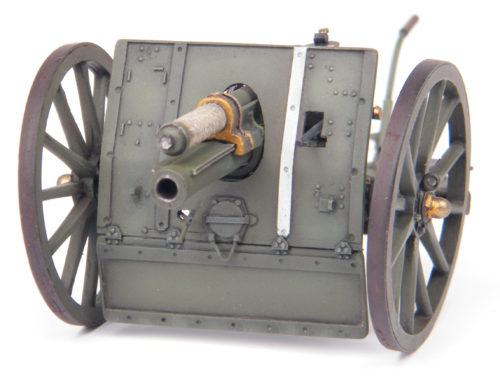 The 13 pounder was an artillery piece developed for the Royal Horse Artillery batteries attached to the cavalry divisions after the turn of the 20th century. More mobile than its counterpart, the QF 18 pounder, the 13 pounder served with distinction in the open warfare of the opening months of World War One.

The first artillery round of the Great War was filed by No 4 gun of E Battery on 22nd August 1914 and the 13 pounder played a pivotal part in the retreat of the British Expeditionary Force in their retreat from Mons.

However, the smaller cartridge of the 13 pounder was found to be less successful against prepared positions as the war became more static and the gun was withdrawn from service, the RHA batteries being equipped with 18 pounders which not only fired a larger shell but had a higher trajectory.

Some 13 pounders were converted in to anti-aircraft guns and fitted to lorries from 1915-1918 and served on the Western Front, Salonika, Italy and Russia. The 13 pounder remains in service with the British army today as a ceremonial gun with King’s Troop, Royal Horse Artillery.

This fantastic model gun kit, cast in detailed resin in 1/32 scale (54mm) provides one of the most detailed representations of this iconic artillery pieces.