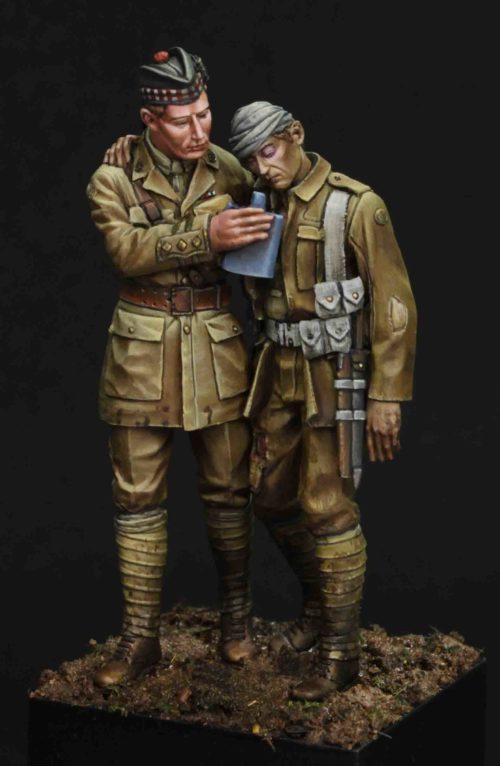 Cast in grey resin, this figure represents Captain Noel Chavasse who won the Victoria Cross and bar in World War One and a wounded soldier of the 55th (West Lancashire) Division in the period 1916-1917.

Captain Noel Godfrey Chavasse was  from Oxford, who as a Royal Army Medical Corps Doctor attached to the 10th Battalion Kings Liverpool Regiment (Liverpool Scottish) during World War One and is one of only three men ever to win the Victoria Cross twice.

Chavasse was first awarded the VC for his actions on 9 August 1916, at Guillemont, France when he attended to the wounded all day under heavy fire. The full citation was published on 24 October 1916 and reads;

For most conspicuous bravery and devotion to duty.

During an attack he tended the wounded in the open all day, under heavy fire, frequently in view of the enemy. During the ensuing night he searched for wounded on the ground in front of the enemy’s lines for four hours.

Next day he took one stretcher-bearer to the advanced trenches, and under heavy shell fire carried an urgent case for 500 yards into safety, being wounded in the side by a shell splinter during the journey. The same night he took up a party of twenty volunteers, rescued three wounded men from a shell hole twenty-five yards from the enemy’s trench, buried the bodies of two officers, and collected many identity discs, although fired on by bombs and machine guns.

Altogether he saved the lives of some twenty badly wounded men, besides the ordinary cases which passed through his hands. His courage and self-sacrifice, were beyond praise.

Chavasse’s second award was made during the period 31 July to 2 August 1917, at Wieltje, Belgium. The full citation was published on 14 September 1917 and reads;

His Majesty the KING has been graciously pleased to approve of the award of a Bar to the Victoria Cross to Capt. Noel Godfrey Chavasse, V.C., M.C., late R.A.M.C., attached Liverpool Regiment.

For most conspicuous bravery and devotion to duty when in action.

Though severely wounded early in the action whilst carrying a wounded soldier to the Dressing Station, Capt. Chavasse refused to leave his post, and for two days not only continued to perform his duties, but in addition went out repeatedly under heavy fire to search for and attend to the wounded who were lying out.

During these searches, although practically without food during this period, worn with fatigue and faint with his wound, he assisted to carry in a number of badly wounded men, over heavy and difficult ground.

By his extraordinary energy and inspiring example, he was instrumental in rescuing many wounded who would have otherwise undoubtedly succumbed under the bad weather conditions.

Chavasse died of his wounds in Brandhoek and is buried at Brandhoek New Military Cemetery, Vlamertinge. His military headstone carries, uniquely, a representation of two Victoria Crosses.

Sculpted by Benoit Cauchies, box art is underway by the extremely talented by May Aguilar (search May Art on Facebook). Benoit was the sculptor and may the artist who also worked on TW32VC01 Piper Daniel Laidlaw which was the first figure in this series of Victoria Cross winners.

Have you considered joining the Tommy’s War Collectors Club? Members get a 20% discount, which is £6.40 off this figure alone. To qualify, purchase a collectors club membership here. The next time you log in you’ll see your discount is automatically applied.