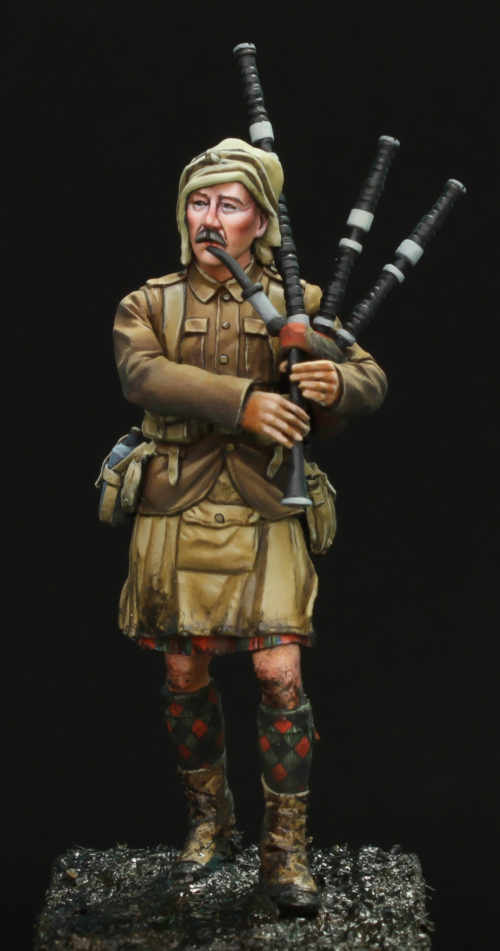 Cast in grey resin, this figure represents Piper Daniel Logan Laidlaw Victoria Cross of the 7th Bn Kings Own Scottish Borderers at Loos in 1915 in the action where he won his VC.

During the battle an attack by the KOSB was held-up by a German gas barrage. Piper Laidlaw removed his gas hood, climbed the parapet and walked up and down playing his pipes to rally the troops. His citation reads:

“For most conspicuous bravery prior to an assault on German trenches near Loos and Hill 70 on 25 September 1915. During the worst of the bombardment, Piper Laidlaw, seeing that his company was badly shaken from the effects of gas, with absolute coolness and disregard of danger, mounted the parapet, marched up and down and played company out of the trench. The effect of his splendid example was immediate and the company dashed out to the assault. Piper Laidlaw continued playing his pipes until he was wounded.”

Sculpted by Benoit Cauchies and box art by May Aguera, this delightful figure is a superb representation of that action, and I hope this is the first of many individual acts of bravery that this series will cover.

A colour reference can be found for this figure illustrated by Mike Chappell in the Osprey Publication Scottish Divisions in the World Wars as part of their Elite series (book 56), ISBN; 978-1-8552-469-5