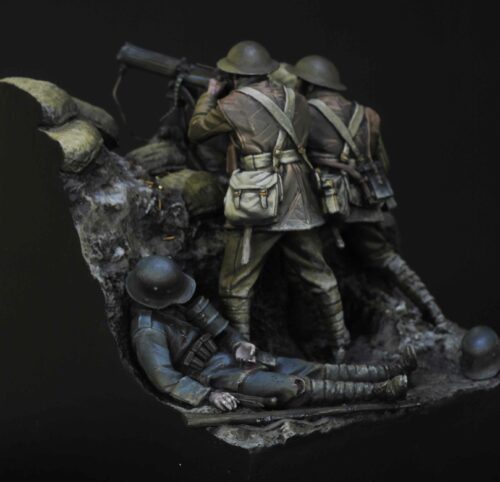 This diorama base shows the British crew of a Vickers Machine Gun defending their lines from German attack. Although described as dated 1917 the scene fits the Western Front from 1917-1918 and the uniform and equipment of the crew is also correct to display any Australian, New Zealand, Canadian or South African machine gun crew for that period.

Included in this set are;

To complete the kit you will need a short piece of electrical or masking tape or thin metal sheet to create the empty bullet belt, some fine wire to show the line from the water cooling can to the gun and some thin plastic, brass rod or wire to create empty bullet casings.

The figure are 1/32 scale and cast in light grey resin and is sculpted by Nino Pizzichemi. The base is sculpted by Andy Belsey and the box art is by Alex Long.