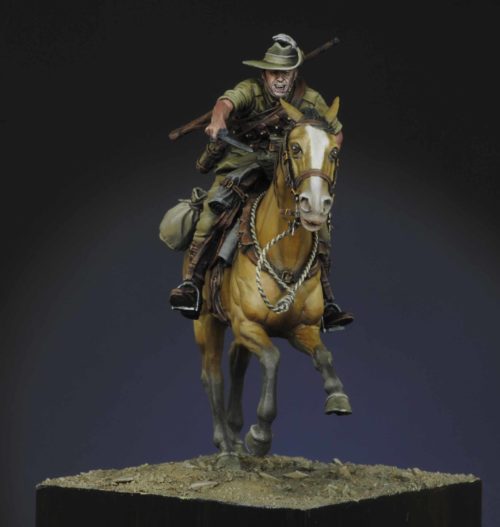 In October 1917 the British Egyptian Expeditionary Force attempted to outflank the Turkish defences at the small town of Beersheba. The town was strategically important as it had a water supply, vital for the tired and thirsty British force. Infantry from the 60th (London) and the 74th (Yeomanry) Divisions of the XX Corps staged limited attacks in the morning, while mounted infantry from the Anzac Mounted Division (Desert Mounted Corps) attacked the strong defences to the east of the town resulting in it’s capture that afternoon.

This release depicts a Trooper of the Australian Light Horse at that charge. As Mounted Infantry not all regiments were equipped with swords and the general order was to sharpen bayonets and charge with the point which is shown in this figure.

Sculpted in 1/32 scale by Nino Pizzichemi this figure captures all the movement and action of a cavalry charge and the detail included in both figure and horse are outstanding. Box art is by Alex Long.

Figure is supplied with an assembly guide and photo etch bridle bits. Modeller will need to fix own reins (indicated in guide) with tape or paper (not supplied).

This is a model kit, not suitable for children under the age of 12. Model requires assembly and painting. Some level of modelling experience is required so we would not recommend this kit for new modellers or anyone not experienced working with resin kits.