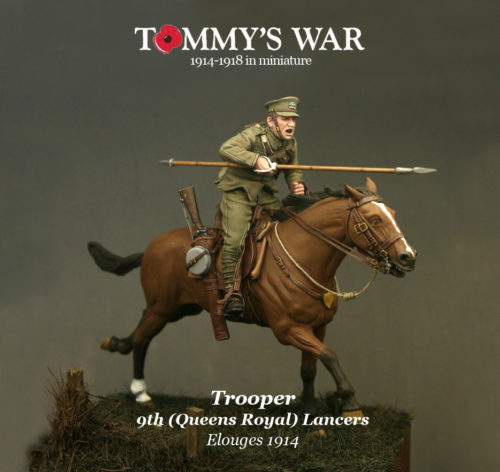 One of our most popular requests from Tommy’s War collectors are for cavalry figures. We really are inundated with ideas for various forms of mounted subjects.

The first in what I sincerely hope is a long line is a Trooper from the 9th Lancers at Elouges in 1914. This battle on the second day of combat for the British army saw the 9th engage first German artillery and then, later, German lancers. Indeed, their role in the first few months of the war was as a classic cavalry regiment.

Both horse and rider are sculpted by Nino Pizzichemi and I am sure you will agree that he has captured the action and drama of the scene wonderfully. Box art is again provided by Günther Sternberg. The result, is one of my favourite figures in the Tommy’s War range to date.

The lance is provided as brass tube with resin spear and base. The pennon (not shown in the box art) is supplied as photo–etch. Full instructions on how to fix the lance are provided with the figure and will also be available as a download on this website.

This is a 1/32 scale model kit, not suitable for children under the age of 12. It is advised that Tamiya masking tape (or similar) is used for detail on the lance and reigns (tape is NOT included in this kit). Model requires assembly and painting.