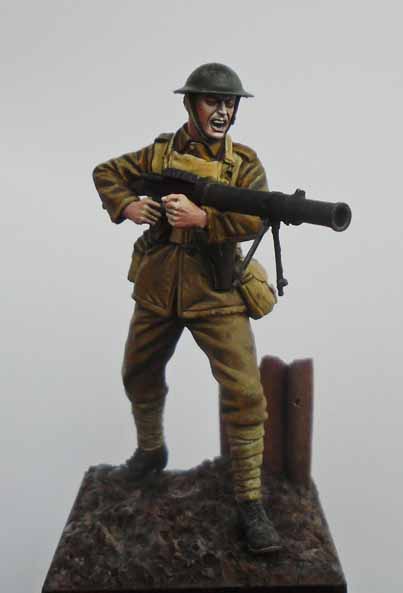 The 14th Bn were raised in September 1914 from men of the Birmingham area and were one of the famous “Pals” regiments that served in the Great War. The War Office had hoped to raise one Battalion (around 1,000 men) but the response was overwhelming and the Warwicks ended-up with three Pals Battalions (the 14th, 15th and 16th Royal Warwickshire Regiment). As the vast majority of the men were recruited from the Birmingham area, the three Bn’s were commonly known as the Birmingham Pals.

The Regiment initially served in France as part of the 5th Division (with the 15th and 16th Bn’s) and served at Vimy Ridge, Arras and in the Somme Campaign at High Wood, Guillemont and Flers-Courcelette before transferring to Festubert. In 1917 they took part in the 3rd battle of Ypres before transferring to the Italian front in January 1918 and then being recalled back to the Western Front after the German Spring Offensive.

This figure can be used to depict any British or Irish  regiment on the Western Front throughout 1918.

The figure is based on a famous image from the graphic novel series “Charley’s War” which was a huge inspiration for this range.

The figure is 1/32 scale and cast in light grey resin and is sculpted by Nino Pizzichemi. Box art is by Edward Sage. Find out more here