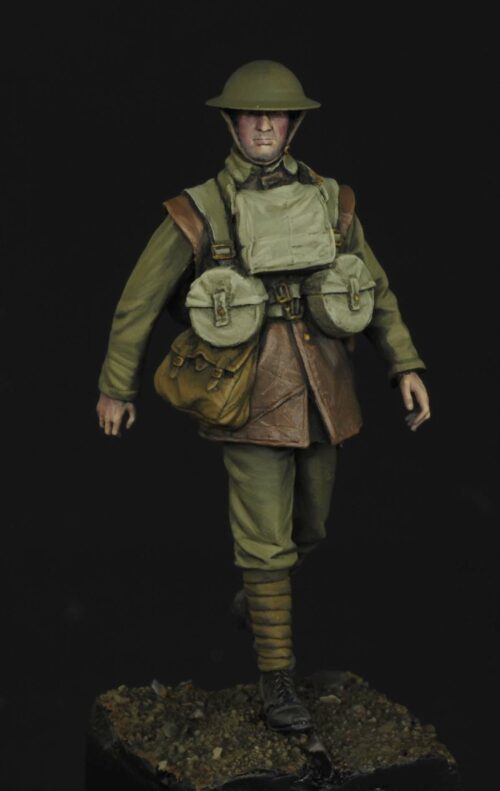 Figure TW32054 is a Private of the 28th Battalion of the Canadian Expeditionary Force at Mons 1918, but suitable to display as any English, Welsh, Lowland Scottish, Irish, Australian, New Zealand or South African infantryman on the Western Front between 1916 and 1918.

The figure is shown as a number two on a Lewis Gun Team, carrying his machine gun. British regiments operated their Lewis Gun teams in the same way; a team would consist of ten men with one gun. The Number One would be armed with a Webley revolver and 1908 pattern leather holster, he would be the one who carried and fired the gun. The Number Two (shown in this figure) was also armed with a revolver and would carry more ammunition in magazine drums in a special holder, he is also shown carrying a leather bag that contained all the cleaning and maintenance kit. Numbers four to six on the team would be armed with SMLE rifles and 1908 pattern webbing, they would also carry additional magazine drums for the Lewis. The figure is complimented by figure TW32BE53 which is the Lewis team number one.

The figure is 1/32 scale and cast in light grey resin and is sculpted by Nino Pizzichemi, box art is by Alex Long.