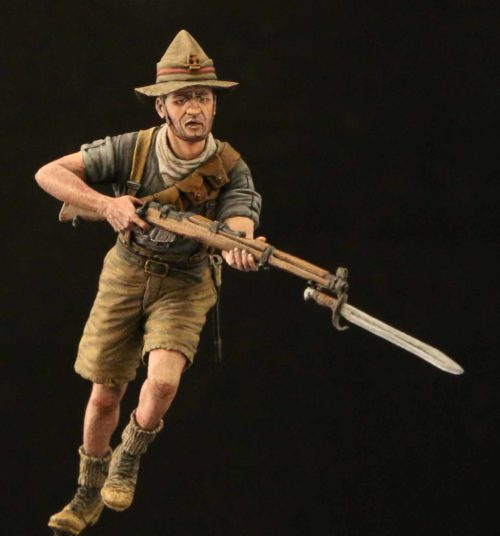 The New Zealand Government had created a territorial force in the years up to 1914 in preparation for war, so when Britain declared war in 1914 the fledgling Kiwi army was in a good state of preparation and sailed initially with the intention of supporting the British army in Europe but were diverted to the Dardanelles. The New Zealand Expeditionary Force took part in the famous Chunuk Bair battle, fighting with distinction.

In contrast to figure TW54015 (Private, 11th Bn AIF) which showed a figure newly landed on the peninsular, this figure shows the uniform as it had been adapted for the difficult conditions. He has cut is serge service trousers in to shorts and he is wearing just his greyback shirt. He has discarded his issue 1908 webbing equipment in favour of the 1903 pattern 50 round bandolier.
This figure is shown wearing the lemon squeezer hat. However, 2 other heads are included in the box for this figure (3 in total) giving you the modeller the following options;
1. Lemon squeezer hat – 1st Bn Wellington Infantry Bn NZEF
2. Slouch hat – 3rd Bn Australian Imperial Force
3. Soft service cap (with neck protection) – 6th Bn Loyal North Lancashire Regiment
This kit offers terrific value, the 3 heads offer different regiment choices. The slouch hat was also worn by New Zealand forces (particularly mounted infantry) and the soft service cap was worn by New Zealand, Australian and British regiments in Gallipoli.
The figure has been sculpted by Nino Pizzichemi and the box artwork is by Michael Butler.