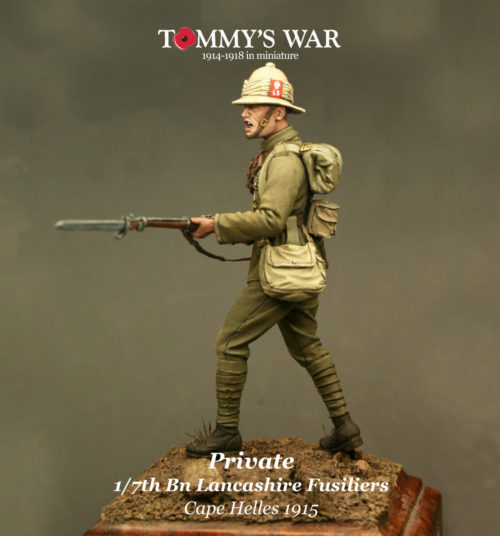 The Lancashire Fusiliers are famed for their action at Gallipoli when the 1st Battalion landed at Cape Helles and and won 6 Victoria Crosses. This action became known as ‘six VCs before breakfast’.

I wanted to show the Wolseley helmet, and decided to depict one of the territorial battalions that had embarked for the Dardanelles from Egypt and landed at Helles a few days after the 1st Bn.
Inspired by the book ‘Hell Let Loose’ by Neil Drum and Roger Dowson, the figure depicts a Private soldier of the 1/7th (Salford) Battalion of the Lanc’s, wearing Wolseley helmet and 1914 pattern equipment. Armed with a Long Lee Enfield rifle the figure depicts the Battalion when they landed. The Battalion went on to serve with distinction in Gallipoli.
The figure has been sculpted by Nino Pizzichemi and the box artwork is by Gunther Sternberg.Please note the following: