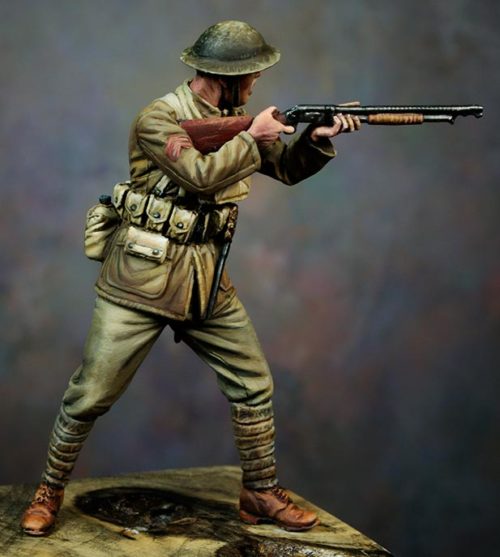 This figure depicts a squad leader in BrigGen Douglas McArthur’s 84th Brigade, from the 42nd (NG) ‘Rainbow” Division which punched out of the St Mihiel salient in September 1918.

His uniform is standard issue, often the NCO chevrons were worn on the right sleeve only by this point. He is wearing late-war web gear and his gasmask is the “corrected English” version. For trench clearing he carries the M1897/17 Winchester 12 gauge pump action shotgun converted to military use with the addition of a muzzle lug to carry the M1917 bayonet. On his hip is a brass-handled M1918 Mk1 trench knife with a 6″ double edged blade.

Note; The colour images show the figures left hand not holding the forend (foreshock) of the gun. We spotted the error post-painting and corrected that with a new hand placed on the forend (see the image of the new unpainted version). Both arms/hands are included in this kit.

The figure is 1/32 scale and cast in natural resin and is sculpted by Nino Pizzichemi, box art is by Ernesto Reyes.