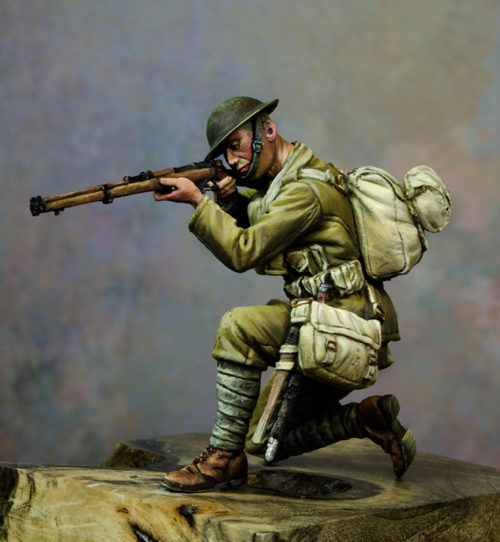 Tommy’s War is the world’s leading range of 1/32 scale model figures. Cast in grey resin, this figure represents a Private of the 8th (City of London) Battalion, London Regiment (Post Office Rifles) depicted on 20 September 1917 at Alberta Section during the Third Battle of Ypres, or as it is know Passchendaele.

This figure is associated with a set of four figures depicting soldiers from the Post Office Rifles advancing into no-mans-land. The Sergeant depicted within the four represents Sergeant Alfred Knight who went on that day won the Victoria Cross for capturing a machine gun under heavy fire after the platoon lost all of their officers. The codes for the other four figures are TW32040, 41 and 41. However, this figure is equally suited to being displayed on its own and without alteration would accurately depict most regiments in the British or Empire army.

The figure is cast in grey resin and is sculpted by Nino Pizzichemi, box art is by Ernesto Reyes.